By Sean August 20, 2010
Over the course of the next couple of months, a few trips to a local neurologist, and another diagnosis, the stay had definitely begun to prolong. My grandfather was now being treated for Chronic Inflammatory Demyelinating Polyneuropathy. His treatment was plasmapheresis (plasma exchange) and extensive physical therapy.

During this time, my uncle and I were working down in Hackberry, LA on a couple monster decks. And when I say monster decks, I mean it. These decks stood all of 10 feet high (give or take a few inches) and in the intense heat, finding shade was barely enough to settle it. Needless to say, in three weeks, we knocked 'em out and that was that. I still need to get pictures of the decks, something I need to discuss with my uncle.

In the meantime, the first round of my grandfather's IV went fairly well, and with the physical therapy, he showed improvement in his strength, and stamina, but after two weeks, we needed more, as we hit the wall that they suggested we might run into. Another round of the plasmapheresis was prescribed, and we waited to receive the medicine. Within an hour of the first day of the second round, we noticed something was wrong.

My grandfather had started feeling congested, and became significantly weaker than what he had been prior to the first IV treatment. This later proved to be a sign of things to come, yet we had absolutely no clue about this. 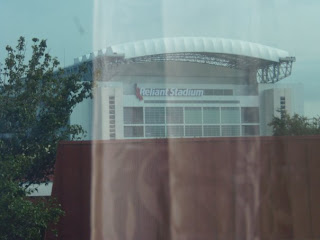 In June, we found ourselves on our way in to Houston to visit a specialist. My uncle Pat tagged along, and we made it to our hotel right across the street from Reliant Stadium. We were also around some incredible restaurants, which pleased my uncle Pat and I greatly. It was also fun riding around in the Charger, seeing the Houston Texans practice bubble, and being in a true big city again (Lake Charles doesn't quite cut it when it comes to consideration of a city.

The checkup of my grandfather ended up being fairly pointless. We were asked to return in 3 months time for a followup. We returned home with no further answers (except for the burden which was placed on my uncle's shoulders being given a prediction and asked to keep it a secret because the doctor ***feared my grandmother couldn't handle the news).

***My grandfather, in 1983, had a cerebral aneurysm which was considered inoperable. My grandmother waited for the day when the aneurysm would burst, resulting in my grandfather's death. Thankfully a doctor (who's name I should know but is slipping my mind at the moment) clipped it in a very risky procedure, that was successful. However, my grandfather suffered a stroke leaving him paralyzed on the left side of his body. My grandmother helped see him back to a recovery, and a return to professorship at American University.

Within two weeks of us being back in Louisiana from Houston, my grandfather ended up in the hospital from malnutrition, low oxygen, and dehydration. The doctors in Houston had failed to recognize or inform us that my grandfather was only two weeks away from hospitalization...

By Sean December 30, 2016
Before we begin, these are strictly my opinion for what entertains me. I would love to hear anyone's opinion on my list, along with what their list is for the 2016 calendar year. I am not focusing strictly on the WWE, and this list will not be strictly singles matches. I also have not watched every match from every company, so if I'm missing something you believe is clear cut, there may be a chance that I did not see the match. Top 10 Wrestling Matches of 2016 2016 was a very incredible year for professional wrestling, in mainstream promotions like WWE and New Japan Pro Wrestling, to independent promotions like EVOLVE and Pro Wrestling Guerrilla. British professional wrestling promotions Revolution Pro Wrestling and newly formed What Culture Pro Wrestling have been a refreshing spark in the European scene and have since seen prominence in WWE's Cruiserweight Classic (CWC) and upcoming United Kingdom Championship Tournament. See the list after the break.
186 comments
Read more