Why You're Bitches [Cinco De Mayo] 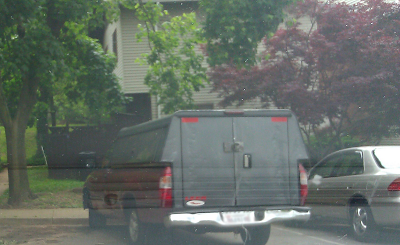 Stupid people NEED to be eradicated. It's not a matter of how or why anymore, simply a matter of need. They can't be allowed to prosper. And before I continue, yes, I know this is a little childish and weak of me, but quite frankly I'm sick of stupidity. It's usually something minor that is the last straw anyways... after all, it IS straw... something tiny, weak, and dull.

I come home from Starbucks today, and find this truck, which doesn't belong to anyone who lives in my neighborhood, especially not in my court, double parked. There isn't assigned parking, but it's common courtesy if you don't live in the court, to park in the middle or down the lot a little ways so that the people who do live here can park a little close to their house.

This dickwad is double parked. I could forgive him if he was just running in to see someone for a minute and leaving right away, but he was double parked before I pulled up 45 minutes ago, and his truck is still out there double parked now. How fucking difficult is it to park properly? And if you don't park properly, back out and straighten your shit up?

I lived in Louisiana for 2 years, country shit, so I know ALL about people parking anywhere on the lawn, crooked, sideways, backwards, upside down... but that's with large yards, a couple acres of land, and the common courtesy to not put your shit somewhere that it blocks others.

I see this shit all the time, everywhere, people double parking. You're supposed to get ticketed for it, but they never do. Parking garages that get packed at the movies are loaded with double parked cars, making the damn-near impossible, impossible. Grocery store parking lots get clogged with it to the point that YOU have to double park in order to double park, or scrape the shit outta one person's car to fit in with enough space to flatten yourself in order to get out of your car after smashing your door into the car.

I'm sick of it... parking is a requirement, it's necessary. There are too many cars on the road as is for people to fuck up one of the simplest jobs there in when driving. But this isn't just about car problems and road rage, this is about stupid people. Double parkers are the same fucking idiots who do stupid shit any-and-everywhere else on this planet in all walks of life at all rungs of the social ladder.

Stupidity needs to be eradicated--whether it be through having knowledge thrust upon the imbeciles or eliminating them from life itself. Stupidity isn't strength, and only the strong survive. I'm not condoning murder, genocide... nothing violent or illegal... but something HAS to be done.